Come join us at Wiedemann Brewery in St. Bernard for a fun evening of beer tasting.    Cincinnati beer journalist Jon Newberry and his wife Betsy revived the beloved local brand in 2012, knowing that there were many thirsty Wiedemann fans across the country.  We will tour the facility and see firsthand how craft beer is made (tour begins at 6:15).  There are more than a dozen tasty new Wiedemann craft beers – Bohemian lagers, IPAs, wheat beers, stouts and ales of all sorts – all on tap from award-winning head brewer Steve Shaw. For a cost of $10 per person (pay at the door) we will sample the different flavors, be given a souvenier glass and a Wiedemann Brewery sticker.  EmpowerU will provide FREE appetizers.  Sign up early, class is limited to 40, payment will be collected at the Brewery.

The legendary Geo. Wiedemann Brewing Co. was founded in Newport, Ky., in 1878 by German immigrant George Wiedemann, and was run by the Wiedemann family until 1967.  It produced its internationally acclaimed Wiedemann’s Bohemian Special Brew and Royal Amber beers for decades at a large brewery complex at Sixth and Columbia streets.

The brewery was sold to G. Heileman Brewing Co. out of La Crosse, Wis. The Newport brewery produced more than a million barrels of beer under Heileman in the early 1970s — the first Cincinnati-area brewery to achieve that milestone – and eventually grew to 1.4 million barrels in annual output.  Heileman closed the massive Newport brewery in 1983, shifting operations to Evansville, Ind., and other sites. Wiedemann production later ended up in Pittsburgh, but when that brewery filed for bankruptcy protection in 2006, production ceased.

Along with world-class beers and brewery tours, the brewery and taproom offer a full menu of tasty sandwiches and appetizers, live music indoors and out, and a spacious sun deck. There are numerous rooms suitable for special events, reunions, community gatherings, business meetings, receptions and parties. Whatever the event, Wiedemann has the ideal space to make it just right in a well-preserved 100-year-old building in the heart of beautiful downtown St. Bernard.

And the taproom features a one-of-a-kind collection of Wiedemann’s memorabilia that’s sure to delight Wiedemann’s fans of all ages. 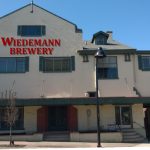