The great Tom Petty passed away on October 2, 2017 and EmpowerU cannot think of a better way to end its 14th Semester than to celebrate his life and music at our semester ending event.   Tom Petty’s impact over 40 years in rock and roll will never be forgotten.

Tom is best known as the legendary frontman of the band Tom Petty and the Heartbreakers.   Born in 1950, his career began with a group called Mudcrutch.   After that, he and other members, including Mike Campbell and Benmont Tench re-formed as Tom Petty and the Heartbreakers.   A string of hits including “American Girl,” “Refugee,” “Don’t Come around Here No More” and “Learning to Fly” helped make Tom one of the most successful musicians in Rock and Roll.  In 1989, Petty embarked on a successful solo fun delivering music videos in the early MTV heydays like “Free Fallin” and “Running Down a Dream”.   Petty’s career of over 40 years included his co-founding of the supergroup the Traveling Wilbury’s (Bob Dylan, George Harrison, Jeff Lynne, and Roy Orbison)  and reforming his band Mudcrutch,   His collaboration with other legendary rockers including Stevie Nicks, and Johnnie Cash is well known.

Petty’s career will be looked at on this special night through listening to his music, his interviews, and comments from many of his peers.   Petty, a student of his music form will discuss in video his own views on music and the art form known as Rock and Roll.   Tom Petty throughout his career has sold over 80 million records.

When Tom was inducted into the Rock and Roll Hall of Fame in Cleveland in 2002 with his band the Heartbreakers Tom said, “The music overcame me at a very early age and consumed my life.”   What a life it was…   EmpowerU you promises you a BLOW OUT for this last event of the year!     We are requesting a $5 donation at the door which will be donated to Musicares, a group that honored Tom in 2017.  Musicares is meant for musicians to have a place to turn in times of financial, personal or medical crises.

–Beer and Wine will be served at this event.

–Join Us early at 6:30 PM as Daniel Regenold will be playing some of Tom’s Hits on the Acoustic Guitar

Daniel Regenold is to open the show

Dana was born January 28, 1953 in Shreveport, LA. His father was in the military and we moved many times in the early years.  They lived in Kansas, Missouri, Kentucky, North Carolina, and then finally in 1962 they settled in Falls Church, VA.  This is where music started to change his life forever.

Next door to him lived a boy who was much older than him, but despite the age difference they still became very good friends, initially through their love of sports.  This is where it happened.  He vividly remembers the boys record player in his living room and the day he pulled out this album with a huge wave on the front, with a surfer on his board.  It was the Beach Boys “Surfin’ U.S.A”.  The title cut opens the record, and that was it, he was hooked.  Then he showed him a record by someone named Chuck Berry titled “Chuck Berry is on Top”, and played the song “Johnny B. Goode”. He couldn’t believe my ears.  It was truly a magical moment.

The final piece of the puzzle fell in to place on February, 9, 1964 when the Beatles made their 1st appearance on Ed Sullivan.  Like so many others, this was a defining moment for him. From that day on, until today 50+ years later, music was the one constant in his life.  From elementary school through high school, college, marriage, children, grandchildren, and lifelong friends, music has been with him for the entire ride.

Starting with his 1st concert in the spring of 1969, with Led Zeppelin opening for The Who, and up until his last concert on May 6, 2017 in Tampa, FL when Joe Walsh opened for Tom Petty, he has been blessed.  But of the hundreds of bands and concerts he has seen, none brought him back again and again more than Tom Petty and the Heartbreakers.

On October 2, 2017 his world as he has known it, became a much sadder place.  He would never see Tom Petty and his amazing band again. Dana had a long career in the record business with Penguin Feather Records in Virginia and served for 29 years as the President of Posterservice, Inc, a sister company of Frame USA. 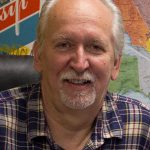