IBM and the Holocaust

Explosive, stunning, and shocking: The story of an American company and the Third Reich.

This is a Virtual Only Class 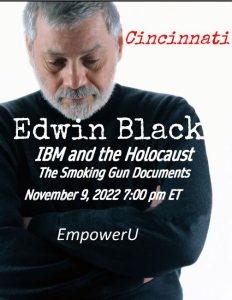 IBM and the Holocaust was first published in 2001 and again in 2012, yet there are many people who have not heard of the events, in this book. The discoveries came about from a visit to The Holocaust Museum in Washington DC.  While Edwin and his parents (who survived Hitler’s reign) stood looking through a glass at an IBM machine, and not understanding the significance, he promised them he would find out why it was there.

It is the stunning story of IBM’s strategic alliance with Nazi Germany—beginning in 1933, in the first weeks that Hitler came to power, and continuing throughout World War II.  As the Third Reich embarked upon its plan of conquest and genocide, IBM and its subsidiaries helped create enabling technologies, step-by-step, from the identification and cataloging programs of the 1930s to the selections of the 1940s.  Only after Jews were identified—a massive and complex task that Hitler wanted done immediately—could they be targeted for efficient asset confiscation, ghettoization, deportation, enslaved labor, and, ultimately, annihilation.  It was a cross-tabulation and organizational challenge so monumental, it called for a computer. Of course, in the 1930s no computer existed.

Black’s book is so enlightening because it paints a richly textured picture of how a man (Thomas Watson, Chairman of IBM), and an entire company, can ignore all sense of morality while not once transgressing the lines of business ethics.  The case is simple and stunning: that IBM facilitated the identification and roundup of millions of Jews during the 12 years of the Third Reich.

Edwin Black is the award-winning, New York Times bestselling international investigative author of 200 award-winning editions in 20 languages in 190 countries, as well as scores of newspaper and magazine articles in the leading publications of the United States, Europe and Israel. With more than 2.2 million books in print, his work focuses on human rights, genocide and hate, corporate criminality and corruption, governmental misconduct, academic fraud, philanthropy abuse, oil addiction, alternative energy and historical investigation. Editors have submitted Black’s work thirteen times for Pulitzer Prize nomination, and in recent years he has been the recipient of a series of top editorial awards. He has also contributed to a number of anthologies worldwide. He hosts the weekly Edwin Black Show. Black’s eleven award-winning bestselling books are IBM and the Holocaust (2001 and 2012), Financing the Flames (2013), British Petroleum and the Redline Agreement (2011), The Farhud (2010), Nazi Nexus  (2009), The Plan (2008),  Internal Combustion (2006), Banking on Baghdad (2004), War Against the Weak (2003 and 2012), The Transfer Agreement (1984 and 2009), and a 1999 novel, Format C:.