Many things did not go well for our first president in his early life.  Yet surprisingly, losses, disappointments, and tragedies positioned Washington and gave him skills he would need to lead later on as general and president.

If any of these very negative events had not happened, he would not have been the George Washington we know, who was in the right place, at the right time, with the right skills needed to play his part in history.
This talk covers his life up to the point his public life began as he became Commander in Chief of the Continental Army in 1775.
Everyone will be interested – it’s not just for history buffs!

Join us in welcoming Millie Henley as she shares the interesting twists of fate of the Life of George Washington. 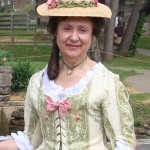