10 Year Anniversary of the Tea Party

What Was Accomplished, What is left to Accomplish?

To View a Full Recording of This Class Click Here

This Event is SOLD Out!  Please check back during that day as seats may open up.  Otherwise please watch online.  Click Here to Join Online Tonight at 6:50 PM

Thanks to Diane Landi for Sponsoring this Class!

Brian Thomas To Attend Event and Reflect On Tea Party

Join Us for the After-Party at B.J.’s Brew-house in Tri-County Mall

Brian Thomas from 55KRC will join us on Monday night for the 10th Anniversary of the Tea Party Movement in Cincinnati.  Expect Brian to discuss many of the great accomplishments of the movement and also where the Tea Party has come up short.  This is the perfect time to visit with a good friend and a voice of great clarity in the Cincinnati area.   Don’t Miss This Event!

In 2009, Mike Wilson was frustrated with the direction of the country under the Obama Administration. His concern prompted him to spend a Sunday afternoon 10-years ago booking Fountain Square for 3 weeks out, creating a website, and starting conversations with family and friends about building an event.   He had low expectations for attendance for what would become the Tea Party’s first march on Fountain Square March 15, 2009.

Mike had read that morning about a few rallies that occurred the day before against the recently passed stimulus bill in cities out west.  With that inspiration, the Cincinnati Tea Party was born and with the help of those family and friends (and several people that heard about the plans and got involved early)three weeks later, more than 6,000 people showed up with signs to Fountain Square to ceremonially dump tea bags and listen to speakers from all walks of life.
During the three weeks leading up to the event in Cincinnati, other tea party events had been held across the nation, but this was the first to draw national media coverage and it unleashed a wave of momentum leading up to Tax Day 2009 where thousands of events were held and nearly a million people attended to advocate for three core values – free markets, fiscal responsibility, and limited government – first championed by the group in Cincinnati and adopted by national groups created to help coordinate efforts and provide resources moving forward. 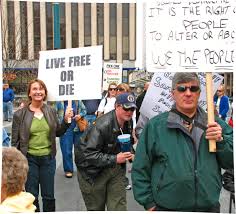 In Cincinnati, the tax day event was held on a cold and wet Wednesday afternoon and still drew more than 4500 people to Fountain Square for a few speakers followed by a march to City Hall to deliver a petition.  For the first time, many regular people felt like they had a voice in politics and found out that participating in politics could actually be a little bit fun as they fought against Cap and Trade (and won), Card Check (and won), and Obamacare (which ultimately passed but with massive consequences to the Democratic Party)

Mike Wilson wasn’t a politician either.  He was a Cincinnati native and graduate of St. Xavier High School/University of Cincinnati with 3 young kids who was now at the forefront of the Tea Party movement locally and across the State of Ohio.  In between working as an IT Consultant/Manager and coaching basketball games, Mike built a team that helped other groups grow across our region and drive a level of citizen engagement that we haven’t seen before or since.  People were encouraged to run for office – from getting engaged as a precinct executive in their party to local government to reaching even higher.  Mike put his money where his mouth is and announced his candidacy for Ohio House District 28 at a September event that drew 18,000 people to Voice of America Park.  He won the Republican primary easily in a 4-way race and faced off against the Democratic incumbent.  In a good Republican year, but terrible district, Mike finished election night down 5 votes out of more than 43,000 cast and ultimately lost the race once provisional votes were counted.   After the race, Mike continued the fight against Obamacare and helped lead the effort to collect 450,000 petitions to put a constitutional amendment on the ballot in Ohio to protect healthcare freedom.  This effort was successful and Mike was chairman of the 2011 campaign that won 2/3 of the vote and enshrined this in the Ohio Constitution.   Mike ran again in 2012 and unfortunately lost again in a difficult year for Republicans all across the ballot.  He then took the opportunity to step back from politics and reengage in his IT career as head of technical operations and a partner in Interlink Cloud Advisors which has grown into the top Microsoft partner in the region.
Joining Mike this night will be three of the leaders involved in the Tea Party movement.

George Bruenemann was the leader of the successful Southwest Ohio Tea Party.   An Engineer and Patriot, George is President and CTO of NgEK, a small engineering firm specializing in the development of artificial intelligence for building sensors and control systems.   Until 2009, George had no involvement in politics, but borrowing a trillion dollars, taking over two car companies, a bank withing 100 days of taking office forced him and his wife Nancy into action.  It started as a meeting with friends and neighbors in their home and eventually became known as the SouthWest Cincinnati Tea Party.  The SWCTP grew over 500 members and was instrumental in removing Steve Driehaus from the 1st district in the 2010 elections.  In 2012, George was President of the Cincinnati Tea Party.

Justin Binik-Thomas is a senior manager at a drug development research organization. In this capacity, he is responsible for mitigating risk, maximizing revenue, and growing relationships with internal and external customers. He holds undergraduate degrees in pharmacy and biology and a graduate degree in business. In his personal time, Justin enjoys being a father and husband. Learn Justin’s interesting story of how he was targeted by a coordinated attempt of our government to silence conservative speech and thought and the chilling effect this had on tea party groups across the nation (…which included EmpowerU).   Two of Justin’s most enjoyable side project-OH Congress! And Read the Bill.

Voice of EmpowerU Don Hurd to Sing the National Anthem!
You’ve got a front row seat to learn what really happened 10 Years Ago to start the Tea Party.   What did the Tea Party Accomplish? What is Left to Accomplish? 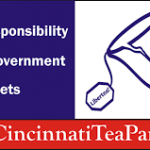